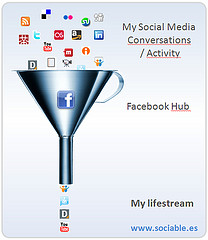 Facebook has flirted with opening up its service and for a while permitted users to export activity on their own Wall via RSS before removing that option after changes in privacy options exposed more information that Facebook or its users were comfortable with. More recently, when users receive email notifications when someone leaves a comment, they can leave a response by sending a reply email. Previously users had to log into Facebook before leaving a comment of their own.

As the hype around lifestreaming has died down, Facebook has continued to implement more changes to its system to encourage people to import more of their online activities into the Facebook garden. This is where I think it gets interesting. Facebook already makes it easy to upload photos and videos, write notes and posts, organise events and buy and sell things without ever leaving the site. It has now also made it very easy to import all this and more from external sources such as the aforementioned Flickr, Digg, Delicious, Google Reader, as well as activity streams from other services such as the music streaming services last.fm and Pandora (US only), importing RSS feeds from your own sites and US only television streaming “catch up” service Hulu.

What do you think all this information says about you? Do you think photos and videos are valuable and say a lot about you, personally and professionally? How about what events you do and don’t attend? The things you like to write notes and posts about? Items you buy and sell?

Add to this mix all the information you have filled out in your profile in the time you have been a member of Facebook – political views, religious affiliations, work history, favourite movies and books, where you went to university, where you went to high school and any other bits of information you care to share about yourself. Also add all the information from third party sources like news stories you like on Digg and music you listen to on last.fm.

Now link all that to your social circle and all the things they like and share. Facebook knows what you like and what your friends like and they know all about what their friends like and so on. This is powerful demographic information available to a site that claims a worldwide active userbase of 350 million people.

What do you think Facebook would want to do with all that information? The ill-fated Facebook Beacon should be a clue. Beacon enabled external partner websites to identify Facebook users via browser cookies and send back to Facebook purchasing and other activities. This information was sometimes published on that user’s Wall and other times stored in the Facebook back end to be used for targeted advertising.

Advertising. It is no coincidence that Facebook has its own advertising network. Beacon demonstrated Facebook’s willingness to extend outside the walled garden in order to monetise member’s personal information. This is certainly a behaviour to keep in mind, particularly in light of previous patchy history in privacy principles and understanding concerns of members.

Next time you add more information to a lifestream aggregator, consider how valuable you and your information are, and consider in whose hands you are entrusting that value.