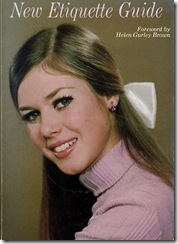 I am happy to concede that I was slow to jump on the Facebook bandwagon. After all, there is only so much adopting that one can do in a fast paced, 2.0 "must be the first, oh please, I just have to be the first" fashion and Facebook was over that threshold. However, once I signed up, I found myself bewildered as I had no context for the rules of engagement. I needed an etiquette guide and I maintain that social networks like Facebook are failing their new users when they don’t at least point to a user-generated guide.

The first attempt was Save Face on Facebook on Wired’s How To Wiki. I was relieved that t he community had filled the gaping void and provided meaning to the bewildering array of behaviours I was witnessing.  It had a common sense list of actions (well, all except the one about not writing on your own wall, that is. Why is that? The whole Wall-to-Wall thing seems counter-intuitive to me and I think that’s one for the Facebook usability gurus to work on). Yet, the guide has let me down. The more astute will notice that this How To entry hasn’t been updated since October 2007.

If you’re looking for sensible guidance in the Brave New (2.0) World, you could do worse than stopping by Proper Facebook Etiquette.  It might save your precious reputation one day.

This entry was posted in how-to. Bookmark the permalink.